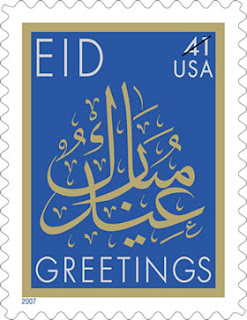 This campaign comes around during the holidays. A bunch of intolerant people want to get rid of the commemorative stamp honoring the Muslim holidays of Eid.

I'm quoted in this story and will post the video shortly.

You can also review what others have said about this issue.

St. Petersburg, Florida - It's the holiday season and people are busy mailing out packages and greeting cards.

The United States Postal Service offers a variety of holiday stamps including ones marking Christmas, Hanukkah, and Kwanzaa. But there's one stamp that some people aren't giving the stamp of approval.

It's the Eid Greetings stamp, which honors two Muslim holidays. There's an e-mail going around calling on "patriotic Americans" to boycott it.

Ahmed Bedier, President of the Tampa Human Rights Council and a Muslim, has seen the e-mail and he finds it troubling. "This is a form of hate mail. Hate speech," says Bedier. "It can be very dangerous and it's full of basically a lot of misinformation."

The e-mail sent to 10 Connects does contain some factual errors. It says the stamp is new and that President Obama had it issued. However, the stamp is far from new. It's eight years old and was created when George W. Bush was president.

Besides talking about the stamp, the e-mail also lists a string of terrorist bombings linked to Muslim extremists. The e-mail says that using the stamp would be a slap in the face to Americans who died.

But one thing Bedier would like to get rid of is this e-mail. Just like the mobs at the post office, variations of it seem to surface every year. And that's one holiday tradition Bedier wishes more people would help extinguish.

"I would recommend just hitting the delete button."

The U.S. Postal Service and several rumor-debunking websites like Snopes offer information about the Eid stamp and the e-mail.