Muslims Killed in the 9/11 Terror Attacks

Missing from the current national controversy over plans to build a Muslim Community Center in Lower Manhattan, is the fact that Muslims were also killed in the WTC A 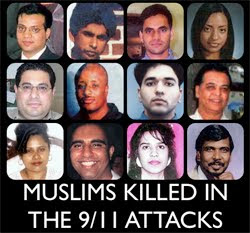 ttacks. September 11th was not an attack by Islam against America, 9/11 was an attack by criminal terrorists against humanity.

Islam and Muslims are not responsible and must not be held accountable for what happened on that tragic day.


Below is a list of Muslims who were killed in the 9/11 attacks.