Ahmed Bedier, who sparked a move to get Muslim holidays on the school calendar, works to promote understanding. 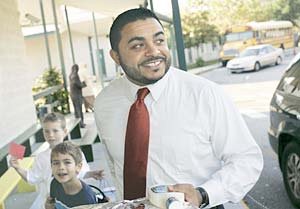 [Times photo: Ken Helle] Ahmed Bedier, Central Florida director of the Council on American-Islamic Relations, walks his son Jacob, back left, and his friend Laith, front left, to class. Bedier's days are busy with media interviews, helping other Muslims and taking Jacob, 9, to school every morning.

TAMPA - He sat in a conference room at Tampa General Hospital, surrounded by Christian chaplains in training.

The lone Muslim in the group, Ahmed Bedier was there to teach.

"What comes to mind when you hear the word Islam or Muslim?" he asked, scanning the room.

No one answered, but he knew what they wanted to say.
It was okay to be offensive, he told them.

"Terrorists," several said at once.

Bedier smiled. Now they were getting somewhere.

"After that, what else?" he asked.

Then it was time for Bedier, who is Central Florida director for the Council on American-Islamic Relations, CAIR, to speak.

"Imagine if you put yourself in a Muslim's shoes in America these days, and you go to Wal-Mart and everybody thinks that about you. It's not a comfortable feeling."
Bedier, 31, had only just begun. He works daily to dispel stereotypes and seek equal treatment for Muslims who face discrimination.

Recently, his push to include Islamic holidays on the Hillsborough County public school calendar launched a national debate. In October, when the board voted to cancel all religious holidays, Bedier was at the forefront of the discussion again, urging restoration of Judeo-Christian holidays. Muslim inclusion, he said, should not harm others.

But Bedier isn't giving up. He has already vowed to try again next year.
Many local Muslims are glad he's on duty.
"He at least speaks and brings out their issues," said Mohammad Sultan, imam for the Islamic Society of Tampa Bay Area Mosque in Tampa. "They see at least some kind of hope."

Born to an economist and statistician in Cairo, Bedier (pronounced Beh-DEER) immigrated with his family to the United States when he was 8.
As a boy, he thought all Americans were rich. He knew about cowboys and oil tycoons from the television drama Dallas, which had aired in Cairo.
The family landed in West Lafayette, Ind., where Bedier's father worked as a researcher at Purdue University.

Bedier spoke Arabic and French but struggled with English. Other children made fun of him, calling him ugly names. He was often in the center of schoolyard brawls.

By high school, he found popularity. A running back for the football team, he envisioned a career in the National Football League. As his family moved from one agricultural research institution to another, Bedier soaked up American culture.
When his parents returned to Egypt, Bedier and one of his three younger brothers stayed behind. They felt at home.

By the time Bedier moved to St. Petersburg in 1994, he had almost forgotten his faith.
In St. Petersburg, he worked as an operations manager for a dental group and eventually opened a dental laboratory. He bought two apartment buildings.
By many accounts, he was successful, financially and otherwise. He enjoyed good food and spent hours at the gym. He drove a silver BMW 5 Series and fed his shopping jones at Saks Fifth Avenue.
But something was missing.

"I felt like I was living a fake lifestyle, like I was living to get pleasure because of what people would say about me or about what I had," Bedier said. "It wasn't fulfilling."
Seeking purpose, he began to spend more time at a mosque, the Islamic Society of Pinellas in Pinellas Park. In 2000, he vowed to read the Koran every day and committed to becoming an observant Muslim.

As Bedier's faith deepened, he questioned his decision to remain in a non-Muslim country. Around him were myriad temptations.

Ultimately, Bedier decided to stay - but to work on behalf of Islam and American Muslims. He volunteered at his mosque, which eventually led to work with CAIR.
His first brush with the media came after the Sept. 11 terrorist attacks. The St. Petersburg Times called his mosque to learn how it felt to be a Muslim in America in such times. Bedier offered to share his view. When CAIR opened a Tampa office in December 2003, he became director.

He sold his business, got rid of the BMW and now listens to the Koran from the CD player of a Chrysler minivan.
"He's very strong in what he does," said Ibrahim Hooper, national communications director at CAIR's Washington, D.C., headquarters. "I wish I had him here in Washington, but then I don't know what we'd do in Florida."

Ask Bedier about an issue facing Muslims, and he can speak for hours. Probe him about himself, and he shows reserve.

He's happy to be in the background. He has been on television enough to want to share the spotlight with other Muslims.
Local religious and political leaders applaud his efforts.

"I've been able to see his heart and know that he really is looking for peace and understanding amongst people," said Rabbi Kate Fagan, a chaplain at Bayfront Medical Center in St. Petersburg.

Hillsborough County School Board member Doretha Edgecomb has learned that Bedier is not always as serious as his subject matter. In October, she watched him deliver lighthearted banter as emcee of CAIR's banquet.
"I was just really shocked," she said. "I had not seen that side of him. The next time we need a funny emcee, I'm going to remember him."

Bedier so impressed the Rev. William Baugh, director of pastoral care at Tampa General Hospital, that the minister invited him to conduct hospital-wide diversity training.
Even people who disagree with Bedier wind up speaking well of him.

Hillsborough County Commissioner Brian Blair, who supported the restoration of a Judeo-Christian public school calendar, calls him a "nice person" and a "gentleman."
"He smiles a lot, and he says he loves Jesus," Blair said, noting Bedier's explanation that Muslims revere Jesus, too.

After meeting Bedier, Pinellas Park resident Mike Allen temporarily withdrew an anti-Islamic display from his yard. It featured a toilet and a promise to flush the Koran to protest terrorism.
Allen said he took it down because he thought Bedier was a nice person.
"That Ahmed Bedier, he could charm the socks off a rooster," Allen said. "He doesn't raise his voice or fly off the handle. He's married and got kids and all that. He's not going to be strapping bombs on his kids. I'm sure he would never condone that."

Norm Gross, head of the media watchdog group Promoting Responsibility in Middle East Reporting, expresses admiration for Bedier's delivery, but questions CAIR's motives.
"We're asking questions that we'd like to get answers to, and we haven't been able to," Gross said. "What is his mission? Who funds him? Let them tell us."

Bedier said he has nothing to hide and maintains that he is simply an activist dedicated to integrating Muslims into the mainstream. CAIR's 31 local chapters are funded by private donors.

By no means, he says, does he or CAIR condone terrorism. Repeatedly, the organization has publicly denounced terrorist attacks.

Bedier sees himself as a regular guy. He is a car-pool dad who drives his son, Jacob, to school; a devoted husband who watches reality TV with his wife, Kelly; a father who must protect his family, including 2-year-old Amira, from harm.

As a precaution, he has an unlisted phone number and gets his mail at a post office box. Strangers once accosted his wife at Wal-Mart. Bloggers disparage him on the Internet.

Bedier accepts his call to activism and has no plan to back down.

"I'm doing it because I have to, not necessarily because I want to," Bedier said. "There's a lot of work that needs to be done, and Muslims are now feeling empowered. They know that somebody's got their back."

Your actions that are presented here can only be described as commendable. There is much healing and mending yet to be completed in the country before we can take the first steps toward the true meaning of peace, liberty, and the American way.
For most, ignorance and hate are easy to turn to when presented with all of the inter-national turmoil we hear about everyday. And when the youngest are given incompetent role models we all fail. There is no easy way to remedy our faults as a Nation, but to show action(as you have Mr. Bedier) lets the world see that there are indeed two sides to this coin we call America.
Some believe hate has no boundaries and are neglectful to it or even advocate it. But the good people like yourself, that are striving in anyway possible to promote humanitarianism and integrity among the citizens can lay down walls of acceptance to halt the hate... to counteract the pervasive ignorance.